After a year of falling iPhone sales, Apple has rebounded with a record-breaking quarter thanks to the iPhone 7 and iPhone 7 Plus.

In the tech giant's Q1 2017 financials, Apple revealed it posted iPhone sales of 78.3 million, up 5% from the same quarter last year, when it sold 74.8 million iPhones. The iPhone set all-time unit and revenue records during the quarter, CEO Tim Cook said on an earnings call, helping push Apple to total revenue of $78.4 billion.

Apple's smartphone sales for Q1, which saw the iPhone 7 and iPhone 7 Plus on store shelves for a full three months, were also up 72% from the previous quarter, when a relatively measly 45.5 million iPhones were sold.

Customer response to the 7 Plus could lead Apple to go bigger than ever before when it releases the iPhone 8, such as introducing an edge-to-edge display, as rumors suggest. This, plus other advancements like wireless charging, could help Apple continue its upward smartphone sales trend year-on-year.

However, Apple doesn't break out sales figures for Apple Watch, so it's impossible to know exactly how the device is doing.

While Apple Watch has enjoyed a leading position atop the smartwatch world, Android Wear 2.0 is due out next week, and with it, a whole new batch of smartwatches. LG is expected to launch a pair of watches housing the OS, so Apple Watch could be in for serious Google-backed competition very soon.

Also on the wearable front, Cook said Apple is "delighted" by the response to the wireless AirPods headphones and said their success points to "huge potential" in the wearable market going forward. Again, no sales specifics were given, but Apple seems high on the new breed of earbuds, despite customer concerns about losing them.

One last positive note: Mac sales were up slightly on the back of the new MacBook Pro with Touch Bar, though that category continues to muddle along for Apple.

Super Mario Run now has an Easy Mode, allowing newer (or impatient) players of Nintendo's smartphone venture to go through the mustachioed freerunner with fewer hassles.

Easy Mode gives players unlimited Bubbles (the game's version of a retry) as well as removes the time limit, taking the edge off for those easing into the game for the first time - as well as more versed folks who've hit a wall at the game's harder stages.

The new difficulty option comes as part of version 1.1.0 of Super Mario Run, so anyone interested in trying out Easy Mode will have to update their game via the App Store.

In addition to Easy Mode, Nintendo also changed the competitive Toad Rally mode to make Toads easier to gain and harder to lose, as well as some bug fixes and tweaks to prepare for future events.

Since its launch in December, Super Mario Run has become a major hit for Nintendo, with the game raking in about 78 million downloads and approximately $53 million in revenue, according to the Wall Street Journal.

The game has a fairly impressive turnout rate for a free-to-play title as well, with over 5% of its downloaders paying the (somewhat controversial, if you look at reviews) price of $10 to unlock all the game's features.

However, Nintendo CEO Tatsumi Kimishima says he isn't satisfied with the results, with the company hoping for a double-digit conversion rate. There's still a chance for Super Mario Run to make more bank, however, as the currently iOS-exclusive app hits Android devices in March.

Following Super Mario Run and its joint operation with The Pokemon Company, Pokemon Go, Nintendo's next toe in the mobile waters is Fire Emblem Heroes, which repurposes the series' classic turn-based strategy formula for smartphones in February.

If you’re a PC gamer, you’ve almost certainly heard of Razer. It’s the purveyor of (relatively) classy PC gaming peripherals, slapping its snakey-green logo on everything from laptops to headsets. It’s very good at it too, with its gear often making the cut in TechRadar’s 'Best of' peripheral lists.

Razer’s not afraid of dabbling outside of the gaming sphere however, snapping up George Lucas’s THX sound technology firm in October of last year and, just yesterday, purchasing smartphone manufacturers Nextbit, the company responsible for the conceptually-smart (but commercially flailing) Nextbit Robin phone, which relied on clever use of cloud storage space as its unique selling point.

There could be many reasons for Razer’s purchase of these properties. In the case of THX it diversifies the company’s portfolio, making it a steadier buy for investors, while Nextbit has talent including Scott Croyle (the design guru behind HTC’s best phones) and interesting cloud storage ideas. It’s worth noting that both companies will continue to act with their own branding underneath the Razer umbrella – but you can be sure each will be trading ideas.

All this got us thinking: what would a Razer smartphone look like? Razer’s a company that's not afraid to take a few risks, so while it hasn't announced plans to develop its own branded smartphone just yet, its latest acquisition doesn’t put this beyond the realms of possibility.

In a “what the hell, let’s just do it” world, here’s what we’d hope to see from Razer.

Many have tried (and many have failed) to bring proper gaming controls to the mobile world. From Sony’s Xperia Play to the N-Gage, it’s never really taken off. 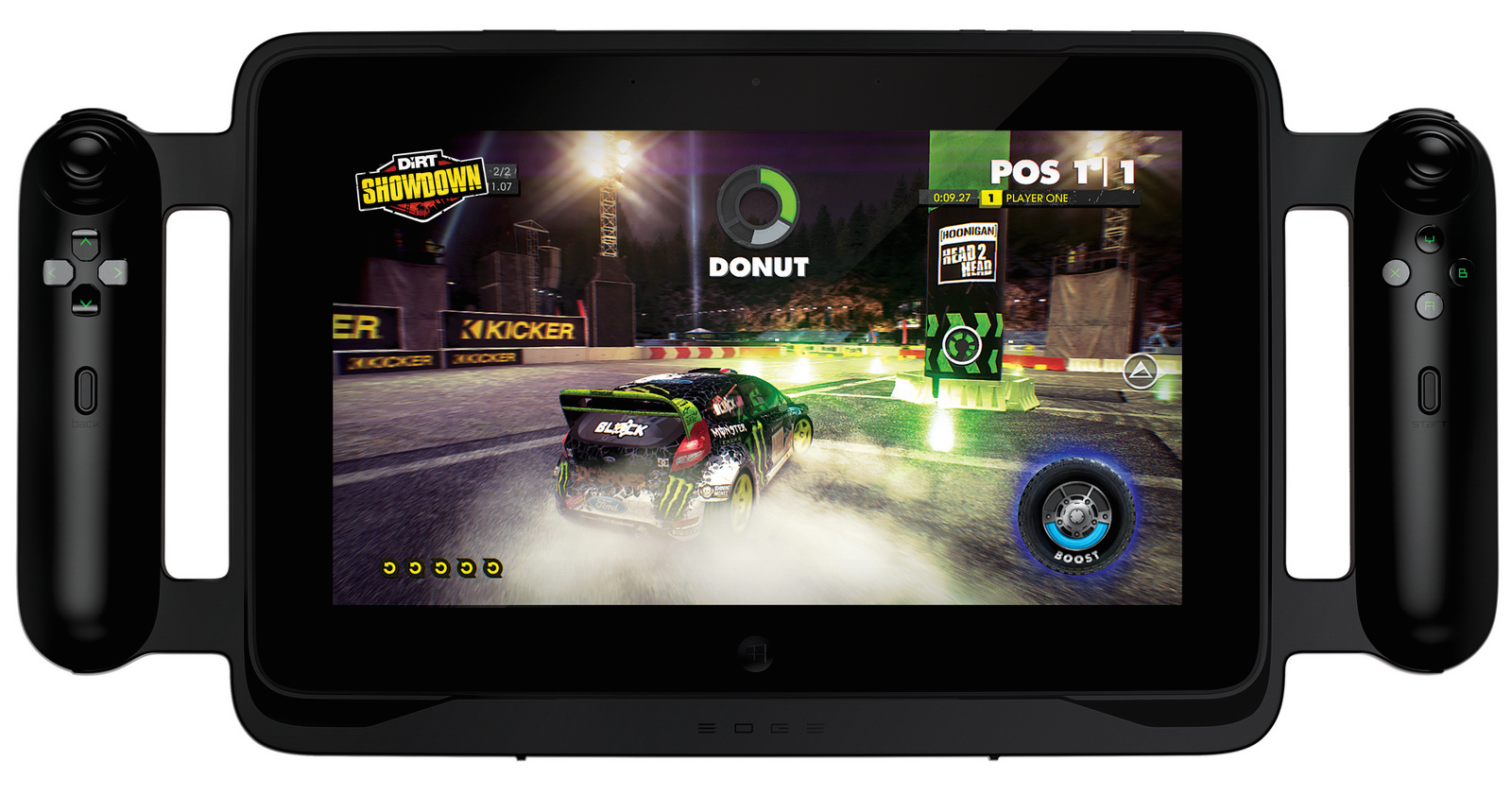 In the tablet space, Razer has even tried itself, with the short-lived Razer Edge Pro being an impressive (if expensive) Windows 8 gaming tablet with controller handles bolted to the sides. In a phone at the right price with the right internals, we still think there’s a place for proper hardware controls in the mobile gaming world.

Alternatively, a haptic touch engine, such as those made by Redux Haptics, could be employed. These are particularly sensitive and powerful vibration motors which can respond to touch in such a way as to give the illusion of physical buttons and controls being built into a screen.

But Razer gear is usually paired with triple-A PC gaming experiences. How do you get them on mobile? Perhaps that’s where Nextbit comes in…

Nextbit’s Robin was built around the idea of using minimal local storage space, and relying on cloud storage to offload files so that you could get the most out of the handset. With Razer having bought the company, it’s surely a feature that it would lean on again if it started making its own handsets. 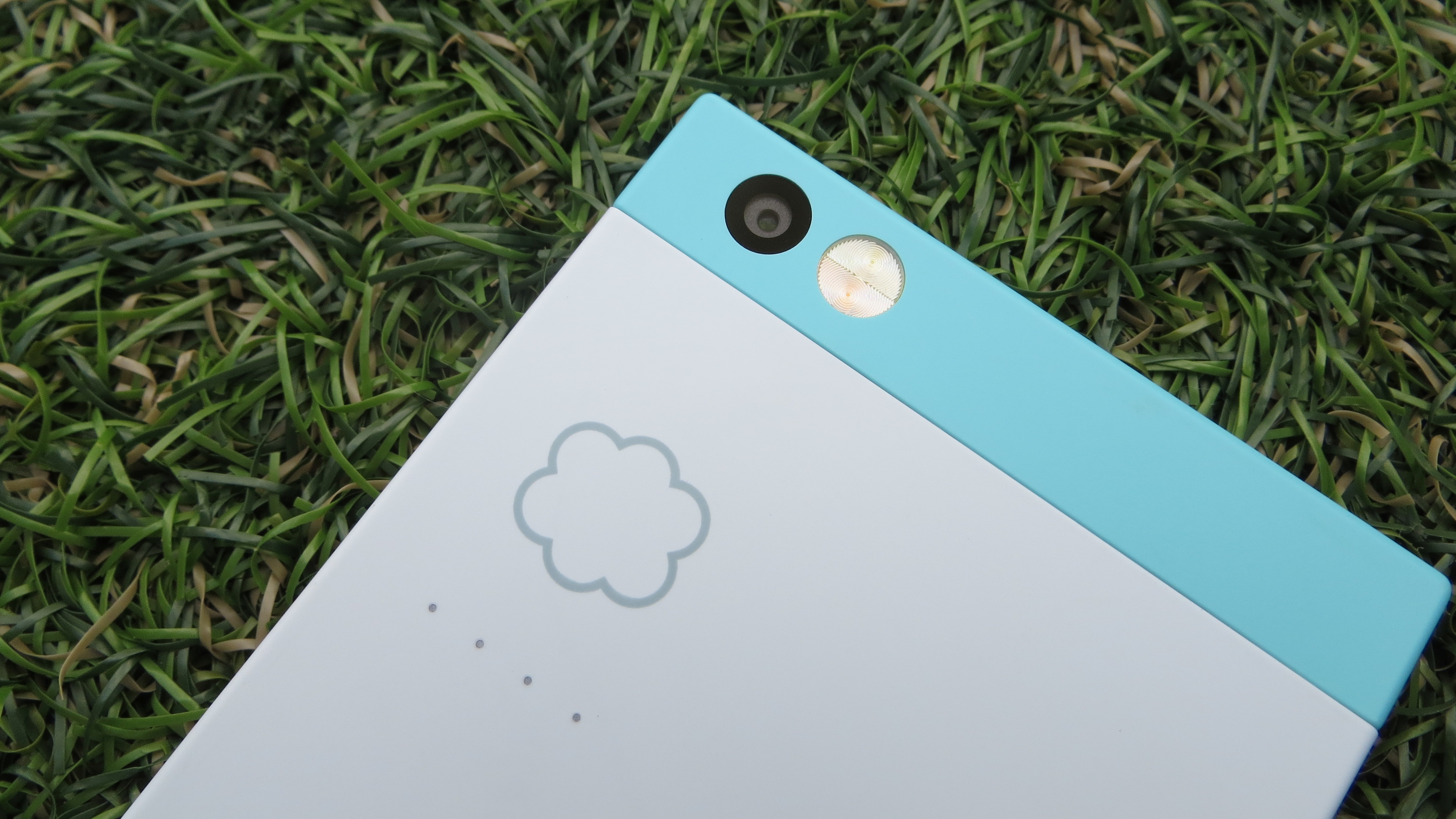 But why not take that idea a step further? As proved by Nvidia’s increasingly impressive GeForce Now service (essentially Netflix for games), cloud-based gaming servers are now more than up to the task of streaming visually-advanced titles to any device with a screen and decent internet connection.

It would take some work, but if Razer could set up a similar platform it would be the sort of unique selling point that would set it apart from the competition. Razer already has its own Synapse software for storing peripheral profiles in the cloud, so it’s clearly already exploring these concepts.

Once you’ve got a device connected to the cloud (and Razer’s own Synapse software), there’s nothing stopping you from integrating a Razer phone with all sorts of experiences, à la the internet of things. 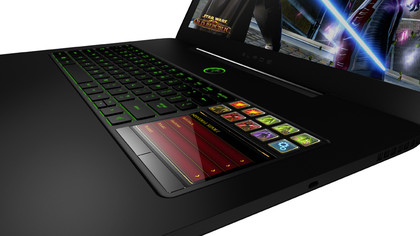 Consider pairing up a Razer Phone with Razer’s own gaming keyboards, where individual gaming hotkeys and macros could be mapped to icons in an accompanying app. Pop the smartphone in a keyboard cradle and Bob’s your uncle – you’ve just added a touchscreen to your PC gaming set up, making complicated MMO hotbars a tap away on the handset. It’s an idea Razer has already dabbled in with its Deathstalker keyboard and Razer Switchblade gaming laptop.

Heck, why not three screens while we’re at it? Razer’s played with multi-screen tech in its laptops before – it had a run-in with thieves who somehow managed to pocket its crazy 12K tri-screen Project Valerie machine during this year’s CES. 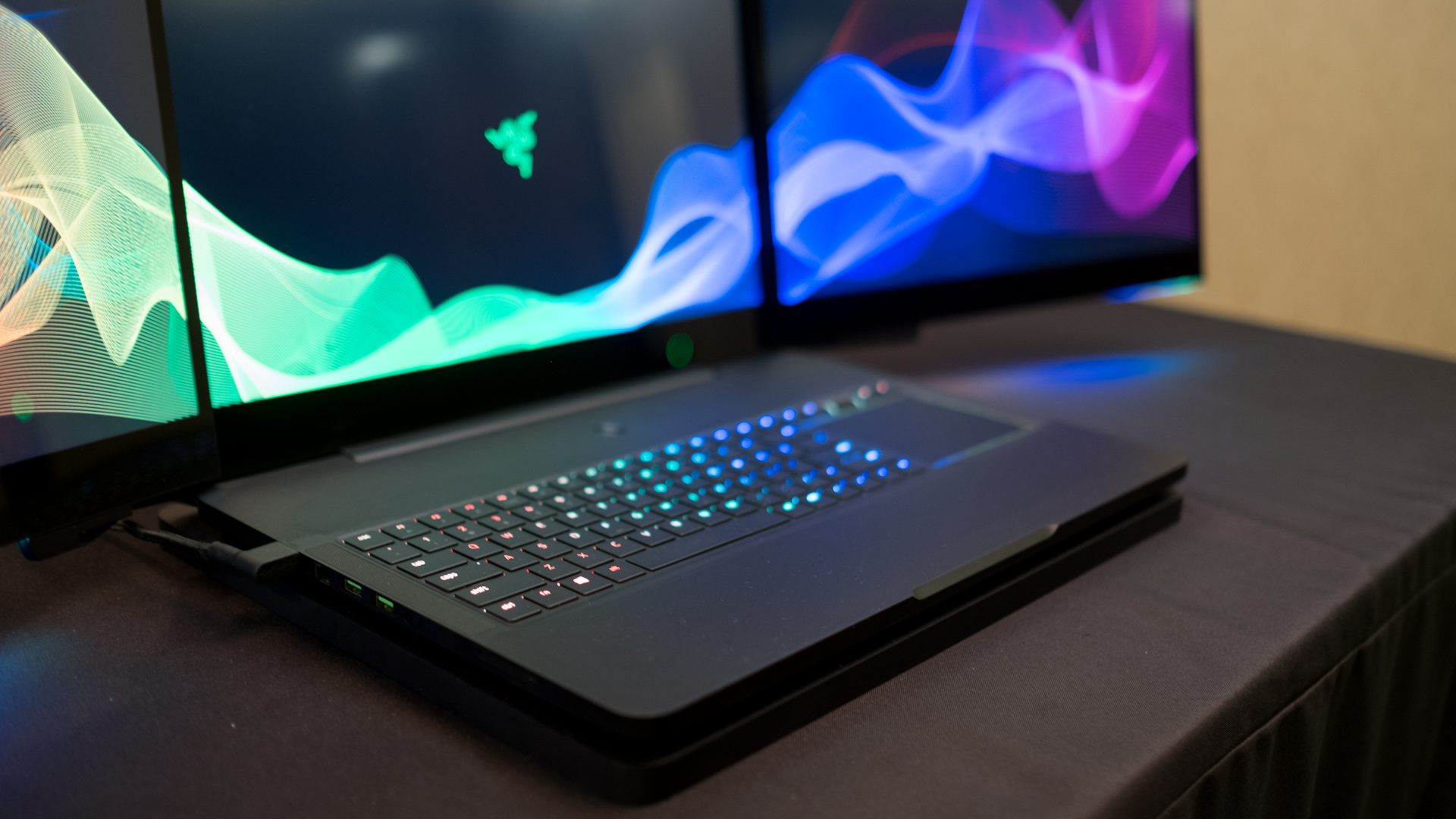 Smartphones with two full-size screens have never really taken off (with the exception of the so-so e-ink YotaPhone). But the promise of a book-like clamshell device is one that still has an oddball appeal – perhaps those taptic controls could sit in the second screen, as per the Nintendo DS and 3DS.

If Razer really was going to throw everything at the wall to see what sticks, they could chuck in the Ariana projection system too, creating room-filling, immersive visuals to accompany any on-screen action.

As far as ker-aaaazy gaming peripheral manufacturers go, Razer’s devices look positively refined by comparison to the competition. Despite its penchant for customizable RGB lighting, It’s cultivated a very recognizable look with its neon green-on-black style. 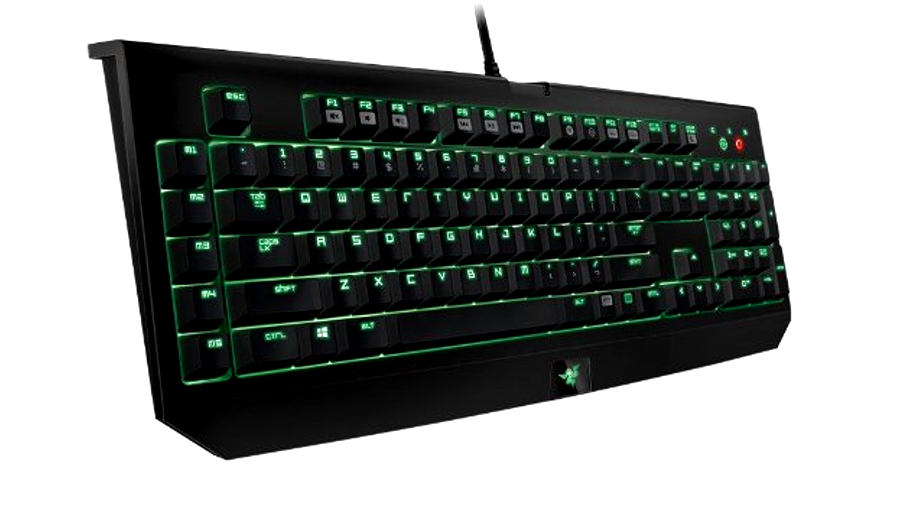 It’s all a bit The Matrix... which, when you come to think of it, is actually quite fitting for a mobile phone. It was Neo’s Nokia 8110 that, for many, made the idea of having a mobile phone cool in the first place.

Pop Nextbit’s Scott Croyle into the mix – he of HTC One design fame – and you’ve got a recipe for a very eye-catching device.

To get all this playing nicely, Razer would have to squeeze in some seriously powerful internals, from top-spec CPUs and GPUs to efficient battery cells. Razer has no problem making devices for those with money-leaf trees in their back gardens. So 5G, HDR OLED displays, bezel-free screens, THX-infused speakers… chuck it all in and we’ll have our Fry-from-Futurama memes at the ready.

Alcatel makes it official with press invitations to an event in Barcelona on the first official day of MWC 2017 — not the day before.

The post Unlike the competition, Alcatel schedules event during MWC 2017 appeared first on Pocketnow.

February 3 is when an event is scheduled and the ZTE Blade A610 Plus is said to be top of the priorities list. And it's a power mid-range player.

The post ZTE Blade A610 Plus rumored for launch in India appeared first on Pocketnow.

If you're a competitive swimmer who picked up one of the nifty new Apple watches released last fall, you were likely pretty underwhelmed by Apple's baked-in swimming app. After my first swim, it was clear that I was going to be next to useless. Specifically, it does a poor job of tracking total yards (usually 300-400 yards off in ...

When's the last time you saw a "dumb" phone reviewed? Here's what we think about AT&T's Cingular Flip Phone after taking it for a nostalgic spin.

The post Cingular Flip Phone Review: Can You Go Back to a ‘Dumb’ Phone? (Video) appeared first on Pocketnow.

Unlock the full potential of Apple Mail with MailButler Professional. A lifetime subscription to this essential email companion is offered at over 90% off the retail price at the Pocketnow Deals Store.

The post Deal: We’ve cut the price of a lifetime subscription to MailButler Pro by over 90% appeared first on Pocketnow.

Whether the Huawei Honor 9 is around the corner or not, last year's Honor 8 looks like a great bargain at B&H in both 32 and 64 gig variants.

Despite what the strongly rumored codename suggests, Windows 10 Cloud will apparently have very little to do with the cloud, instead contending Chromebooks.

The post Windows 10 Cloud is the codename of Microsoft’s Chromebook counteroffensive effort appeared first on Pocketnow.

That long overdue Samsung Galaxy Tab S3, or at least one 9.6-inch version with Snapdragon 820 power, is almost definitely headed for Barcelona.

Apple's watchOS 3.2 developer preview finally brings Theater Mode and SiriKit integration to the table, though a final release may still take a while.

Following up to Uber, Lyft can now take your ride requests up to a week in advance wherever you need it. You can use your calendar to help out.